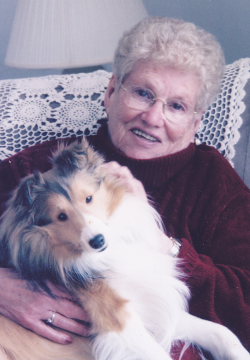 The family of Marion Sarah Rushton of Oxford, Cumberland County, Nova Scotia are deeply saddened to report the passing of our beloved mother at North Cumberland Hospital, Pugwash, NS on  January 2, 2023.

She was born at Grays Road, East Hansford, NS on February 6, 1926 to James Hudson and Edith Clara (Rushton) Hudson.

Following attendance at East Hansford School, Marion moved to Oxford and eventually found work at the assembly plant in Amherst, then known as Canada Car Company, and then for a time at Oxford Woolen Mills making the famous Oxford blankets.  In December of 1944, she married Leon Victor Rushton.  Together they raised six children and cherished the subsequent arrival of five grandchildren. When the youngest of us were old enough, she worked for a number of years at Oxford Frozen Foods.   Following Dad's death in 2001, Mom threw herself into the task of being an independent woman, running her household on a fluid schedule, always making time for daily walks around the neighbourhood, aggressive Rook games with Bev, Helen, Phyllis and anybody else who dared.   She also reclaimed  the carport where Dad built his miniature Oxford Sawmills and created her own version of a lanai.  She continued her interest in the Oxford Pioneer Club of seniors and always ensured her earrings co-ordinated with her outfit, her lipstick and nail polish matched.  If we teased some of her earrings were the size of small hubcaps she always replied "it took a strong woman to carry them off".  Much of these fantastic pieces came from Shirley and Sheila, nieces who adored her, and she them.  Never one to shy away from controversial sweaters, she was the frequent beneficiary of samples from dear niece Barb and grand niece Lisa in Prince George, BC.  Nephews John Hindson and Frank Lucci never failed to check in when in the area.  Her favorite Doctor Blaikie and his staff benefitted from the shock and awe of one particular sweater with grace, and always praised her zest for life even in her nineties.  After moving to the senior unit on Foundry Street some years ago, she kept up her walking commitment even though a fall and major break in 2021 set her back.  Nevertheless she and neighbour Betty could be seen working their way up and down the driveway and were proud of their commitment.   In her senior years, she gained great comfort from her furry companions MacGyver and Sandy.

She was predeceased by husband Leon in 2001 and by brothers Milford, Layton, Pearle, Duncan, by sisters Hazel, Helen, Eva and by three brothers in infancy.

Mom had many friends throughout the area whose acts of kindness no matter how simple  will be remembered.  For Micki's homemade soup, Brian's fresh rolls, Helena's fudge, Gloria's desserts and other kindnesses too numerous to detail we say thank you.  Words cannot express our gratitude to Dr. Peter Blaikie and his staff for their caring ways over the years, as well as the  staff of North Cumberland Memorial Hospital for their support in the later days of life.

Those wishing to make a donation in memory of Marion may do so to the charity of your choice.

Condolences may be sent to the family by visiting www.allenfuneralhome.ca or through the W. Allen Funeral Home Facebook page.